Abigail Benjamin is the Director of Public Affairs at SPP. She specializes in engaging the public and elected officials on behalf of SPP’s clients, sharing their messages in a variety of ways. Abigail has worked for years in public policy and state government.

Before her time at SPP, Abigail served as a Senior Legislative Aide to State Senator Terry Johnson. In that position, she worked to implement the Senator’s legislative priorities. Abigail communicated with constituents and state departments on a range of issues on the Senator’s behalf. Before joining Senator Johnson’s team, she served as the Deputy Finance Director for The Ohio House Republican Organizational Committee. There, she planned fundraisers and special events to raise millions of dollars in the 2018 election cycle.

Abigail graduated from The Ohio State University with a BA in Political Science. She resides in Columbus Ohio with her husband and two kids. She is an avid runner and volunteers regularly at her local church. 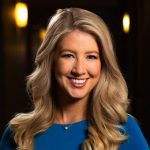